Over the River and through the Woods


After three trains and two car rides, we have arrived in Howard, Pennsylvania. We all slept fairly well in the coach seats of the Amtrak Superliner, the Capitol Limited, from Chicago to Pittsburgh (it continues on to DC after that). We arrived in Pittsburgh just before 5am, stumbled through the 14 degree morning to an Einstein Bros. and made it back in time to catch the Pennsylvanian at 8am on its way to New York. Parker’s Dad was waiting for us at the door of the train in Tyrone.

Door to door the trip took us 21 hours. It could be done in less even on the train, but speed wasn’t our main objective this time. Also, the bulk of the travel was done while sleeping, something impossible for all four of us to do in the car (unless we want to re-enact that scene from Trains, Planes, and Automobiles). Parker pointed out that while he hadn’t gotten the best sleep of his life, he also didn’t arrive half sick from overcaffeinating himself. We gave ourselves plenty of extra time in Union Station too, which we don’t necessarily need to do next time.

I feel like once a trip is over, I tend to think “Oh, that wasn’t so bad.” My brain has a way of deleting the worst of things in my memory. But really compared to traveling with kids by car or plane it was much gentler if slower and that might be just the right pace to travel over the river and through the woods with preschoolers.

In her book, An Altar in this World, Barbara Brown Taylor suggests trying on the practice of traveling at the pace of a child. When I can do this (without resentment) I do find more wonder and awe in things I would otherwise overlook like the speed of the flusher on the train toilet or the pleasure of a visit to the snack car for pretzels and Gatorade. 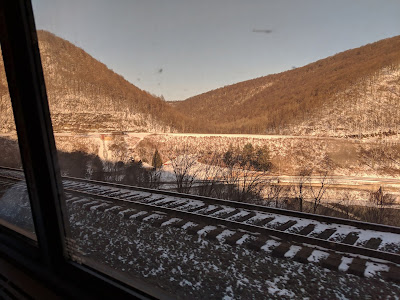 our trip.  The Curve was the height of technology in 1854 and by allowing passage of the Allegheny Mountains cut a four day trip from Pittsburgh to Philadelphia to less than half a day. Today it is still the tightest a train can turn without running off the rails. On the side of the mountain, overlooking multiple reservoirs, the view is breathtaking. In the middle of the turn folks gazing out the window can see both the front and back of their train at the same time.

As all four of us piled onto two seats to enjoy the view, I was grateful for the opportunity this method of travel gave me to spend so much time with three of my favorite people. They will  only be this small so long and no matter how we traveled I would be glad to be with them. This way they were in my lap, reading books, eating clementines and chocolate, looking out the window, and charming our neighbors. If we sacrificed some speed for those small pleasures, today, for this trip, I’ll take the trade-off.

And sitting at Grandmother #1's house, happy, warm, and drowsy it all seems worth it.
Labels: #OneLessCar Amtrak One Less Car