Howling at the Moon 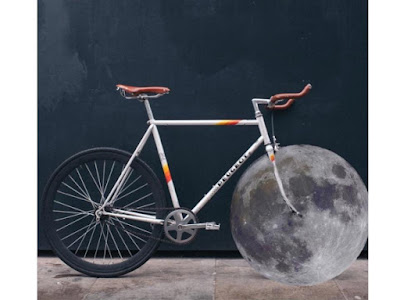 Back in July my spouse, Parker decided to organize a full moon ride. He created the route, created a fun graphic, and threw out an invitation on Facebook. Our next door neighbor came over to watch over our sleeping kiddos (yes, in case you're wondering we do have the world's best neighbors) and at 9pm we were both off. I had no idea if anyone would show but there were 26 enthusiastic people on that first ride. He's been doing it every month since even into the winter season.

The city is different at night. The first time I rode to an evening meeting across town in the dark I felt like  Spiderman, except with wheels instead of webs. There was something more exciting about riding in the dark. By a certain hour the car traffic has dissipated, and I feel more in charge of my space even on busy Chicago Street. At night the city lights sparkle even in the summer and a blanket of shadows envelopes everything. On nights like tonight, the moon looms large and peeks from behind clouds and the silouhettes of buildings.

Biking in a group at night is even better. For one thing, there is visibility and confidence in numbers. Then there is that empowering feeling you get when you realize that the lights behind you are not a car but other riders. There are the casual chats and the camaraderie that comes with climbing the same hills together. Then there's the fun finish that the ride organizer has thrown in to each of these rides, a final, flying descent down by then nearly deserted Highland Avenue. Someone once used one of their fancy apps to clock us nearing the 35 mph speed limit on that downhill. That's fast and fun.

Tonight not only did we receive all those gifts but we got a tour of the town's Christmas lights, something I like to think of as great American folk art. We traveled up on to the east side and then back down to tour the city's portion of the bike trail and catch the Festival Park display. Then we wiggled our way through the near west neighborhood. I even got a glimpse of that fabulously overdecked house on Monroe near the church. And have you seen the Christmas Dragon near Walnut and Elm? That I was not expecting.

I arrived back at Advocate Park as I have after each of these rides, buzzing with the enjoyment of a 7-8 mile ride at night through my city with friends.

People often ask me variations of questions along the theme of "why ride a bike when you could drive?" For me there are so many reasons. But my best first answer is it's just too much fun. I mean, why would I drive a car if I could ride my bike?