As if on cue, when I looked up from my breakfast this morning it started to snow. Or, at least that's when I noticed it. I rode to the morning worship service at the church where I pastor early, before much had fallen. The ride back was a bit more harrowing since by then the snow was really coming down and the streets were messy. A few cars passed closer and faster than I would have preferred given the conditions, but even in the storm there was a festive spirit in the street. Folks rolled down their windows to call out "Merry Christmas!" "Happy Holidays!" waved the men outside of an apartment building on Chicago.

Because Christmas Eve falls on a Sunday this year, that meant I had two services today when I would normally have either a Fourth Sunday of Advent service or a Christmas Eve service. In between, I
had "lupper" (Surely, you too have enjoyed this between lunch and supper mealtime, no?) with my family, cleaned my house, and packed my bags for tomorrow's Amtrak trip to Pennsylvania, all while contemplating how to get back to church tonight. I could bike but I just wasn't sure how traffic would be. I have found Sundays to be the worst traffic days to be on a bike on the street in Elgin (I could write a whole post about this). I wasn't sure I really wanted to find out what Christmas Eve Sunday snowstorm traffic was like. So, I walked.

It usually takes about 35 minutes door to door but it took a little longer tonight in the snow. My feet were cold but mostly dry as I marched through yet-to-be shoveled sidewalks. I won't lie. It was a good portion drudgery. I was thinking maybe I had made a mistake. I should have chosen differently. Used my bike or ride-hailing. What was I thinking?

Then I hit the city-shoveled sidewalk and made my way across the Highland Avenue bridge. The geese were making soft noises as they curled up in fluffy, floating groups on this frosty night. I paused to stare down at their cozy-looking, round bodies. When I looked up, I spied that Fox River fox sculpture, adorned tonight in a festive red scarf. He grows these sometimes, mysteriously, in the winter. If I had been on my bike would I have noticed it was back? And just in time too. Walking up to him I thought about the delight someone had in making that little scarf for his little sculpted neck. He looked so festive and friendly that I pulled down my balaclava and kissed him on his hard little nose.

The rest of the walk seemed warmer, and heading up the hill on foot I began to fancy myself a pilgrim like I have always dreamed of being on the Appalachian Trail or La Camina in Spain--only I didn't have to leave my own city to do it. I am a sucker for anything that allows the ordinary to become beautiful. I can be awed by Van Gogh's Starry Night or Yosemite's El Capitan. But speak to me of the holiness of a crack in the sidewalk or a single stone in a pile of gravel--then you've really got my attention. A walk through my snowed-in town made me treasure and bless each and every shoveled sidewalk. It allowed me to greet three other pastor colleagues coming and going from their services. It gave me an awed appreciation for good boots that have lasted more than ten years.

I arrived at church with a colder nose and a less stressed spirit than when I left my house. On the way home I kissed the fox on the other side of the river. He had a little red scarf too. 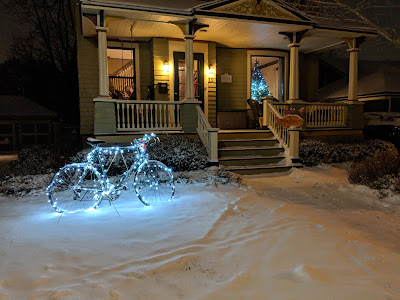