Networked connections: Bridge over Fox River at I-90

Connected networks are very valuable in a bike friendly community. Connections are important because a network is only as useful as its ability to get you where you want to go. Ending up at a dead end, whether it is a absolute physical barrier, such as an unbridged river, or a structural design barrier, such as a street that lacks accommodation to allow safe bike riding along it or even to cross it, quickly becomes a barrier to using a bike as transportation. Since grids are the most efficient and effective transportation network system for a city/community, it is exciting for a bridge designed specifically for bicycles and pedestrians to be in place crossing the Fox River at the northern end of the city of Elgin. 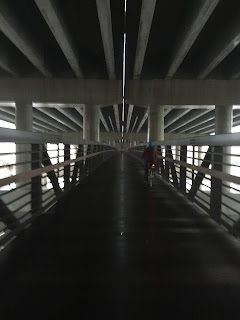 In late-fall of 2016 the pedestrian/bike bridge underneath the I-90 bridge over the Fox River was completed. This bridge had previously been in place prior to the I-90 project and with its renovation, the pedestrian/bike bridge was redone. The bridge connects the Fox River Bike Trail, on the east side of the Fox, to an auxiliary trail that runs west to Tyler Creek Forest Preserve. Beyond these recreational trails and facilities, this connectivity offers access to several businesses and education institutions, not to mention the connections offered by lower volume streets along and into the northwest side of Elgin.

On the west side of the bridge, the bike path initially offers a 'T' to go either south or north. The southern option is not currently open. The path is covered with debris and there appears to be a small bridge that is not open. The north option is open and connects to Airport Road. Using Airport Road a rider then has access to the full business park on the north side of I-90. A rider can also just immediately turn south on Airport Road, which becomes W River Road on the south side of I-90 to eventually access the auxiliary trail. The south side of I-90 route connects into Judson University and the other businesses/residences. It also connects to Davis Road on the west side of State Street/SR 31, which is a bike route along the northwest side of Elgin. 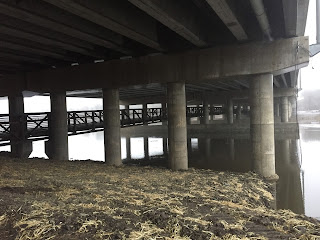 The bridge appears to match much of the same design of the Fox River Bike Trail. It is comfortable to ride side-by-side, but, as with the trail, riders will need to pass one another riding single file each direction. The bridge is placed in the middle of the two highway bridges. There is a very small gap between the bridges over top of the bike bridge, which is just big enough for precipitation to pass through. On the day we road it, the weather was misty. The bridge was very wet, but the water alone did not seem to make the bridge slippery. I am not sure what the bridge is like when the temperatures are below freezing and there is a source for ice.

Overall, the bridge is a lovely way to cross the Fox River. Even in the mist and chill that was settling in at the end of the day, we really enjoyed the ride across the river. I look forward to piecing together routes for move adventures and errands using this renewed piece of bike infrastructure on the north end of Elgin.