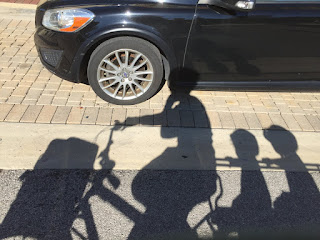 Amateur photographers occasionally catch their own shadow in the pictures that they take. Sometimes this adds to the picture and sometimes it distracts from what was supposed to be the focus of the picture. As I take on the Elgin Bike Hub efforts, which includes storytelling, I am sure to catch my own shadow. I hope that my own shadow does not distract from getting pictures of the fullness of Elgin and all the people who ride bikes here.

With that in mind, who is it that is casting this shadow? I'm Parker. I'm an at-home-dad who came to Elgin in 2015. I have been struck by the walkability of Elgin and even more so by its bike-ability. A few months ago, I began the personal transition to using a bike as a primary mode of transportation. At first, this meant a bike trailer to bring along my little ones and to be able to handle cargo (i.e. groceries). As we got more comfortable with the arrangement, we decided to sell our second car and buy a cargo bike (basically a pedal powered mini-van). You could say, I am enthusiastic about the use of bicycles as transportation, and my family is "all-in." You might think I'm a little too intense for your own life plans, but I think it just takes all types.

So I'll be out there on the streets and trails of Elgin. If we cross paths, say "hi" and if we have time, maybe you can share your bike story.
Labels: Beginnings Introduction