Today I spent the largest chunk of my morning out in the snow on sleds with Parker and my two preschoolers. On a snowy winter day with nowhere to go, I feel like we can't get much luckier than to live down the block from arguably the best sledding territory in Elgin. Now that we are all large enough to find sledding thrilling rather than a terrifying trick the parents thought would be "fun," we had a blast flying down hills and climbing/flopping back up to the top. And we didn't have to worry for a minute about how we would get there.

Between the Greatest-Neighbors-in-the-World's and Parker's efforts, the sidewalk on our part of the block was looking pretty good by the time we were sipping hot chocolate inside. That was before our across-the-street neighbor Mike appeared as he so often does after a snowfall with his gas-powered snow-blower like a ski-cap clad knight-in-shining-metal and cleared the sidewalks for our entire neighborhood (about two blocks worth anyway). I've thanked Mike for this neighborly kindness before but I don't know if I've ever fully conveyed my appreciation (So, if you're reading this, Mike, I hope you are reading it loudly conveyed!).

Today was Martin Luther King Jr. Day, so no one was in attendance at our neighborhood elementary school, but tomorrow parents and children will descend in their twice-daily rush hour that turns our sleepy corner into a major thoroughfare for about 30 minutes at a time. There are more cars in the winter, as the number of families and children walking to school diminishes with the temperature, but there will still be a number of adults, children, and strollers making their way along our sidewalks tomorrow. And I know Mike's efforts will make a huge difference to them.

This week urbanist Robin Mazmuder's piece on #snowbility made the rounds on bike twitter. Mazmuder pointed out the perils of un-shoveled sidewalks for the elderly, folks with mobility issues, folks commuting to work by foot, and families with children. If communities lack a consistent and organized effort to clear snow from sidewalks, it can mean isolation, missed doctor's appointments, loss of income, and worse, making the often difficult winter months all the more so. As someone who pre-cargo bike used a stroller to get around the neighborhood with children, who prefers to use the sidewalk on some bike commuting routes, and occasionally prefers to walk to work, I know first-hand the havoc a thick covering of snow and ice can wreak on mobility--one that often unfortunately persists in my city (like many others) long after the streets have been cleaned up for car traffic. Indeed, if my trek to work tomorrow is anything like other post-snowfall commutes, I am confident I will pass sidewalk patch after patch that has been cleared enough so that the occupant of the property can get to their car but no more, leaving much of our shared path buried under a layer of snow that eventually becomes more and more treacherous (or un-passable) as the footprints over top are iced-in.

At Elgin's Martin Luther King Jr. prayer breakfast I attended Saturday, Dr. King Humanitarian Award winner Traci O'Neal Ellis cited this King quote in her acceptance speech: "An individual has not started living until he can rise above the narrow confines of his individualistic concerns to the broader concerns of all humanity." King was a fierce champion for creating a beloved community free from the pervasive social ills of racism, poverty, and militarism (work the emerging Poor People's Campaign seeks to carry on), where all are truly deemed beloved, worthy of dignity and respect. As I contemplate the commute many will face tomorrow through piles of snow and ice next to freshly cleared streets, this quote of King's arises afresh in my mind.

The sight of Dr. King on a bicycle was not a sight I expected to find today but there it was in my now bike-heavy social media feed, alongside the "I Have a Dream" quotes, "The Letter from a Birmingham Jail" memes, and the haunting mugshots. I had never for a moment imagined this social justice giant on a bike. But how did I imagine folks got around during the Montgomery bus boycott? Surely most of those trips were made on-foot in a time long before the explosion in private car ownership or the bike boom of the 1970's for that matter and in a time when wealth was even more overtly, thoroughly robbed from people of color by a (still pervasive) system of white supremacy.

I will not go so far as to claim that King would shovel your sidewalk or ride a bicycle through a Midwestern winter. But seeing that picture of King on a bicycle called me to attend ever more so to the ways my own writing, thinking, and efforts regarding transportation equity are not merely centered on my own preferences but on a fierce call to center the transportation needs of all those whose needs are not currently centered, including the elderly, children, and the economically disadvantaged--a disproportionate number of which are people of color. I feel as though Parker and I are only just beginning to figure out how to effectively step in to this work of building equity in transportation, but as I continue to find my way, it's the equity I want to keep in my central focus. So, when roads are clear and sidewalks are not, what does that say about our current levels of equity in transportation?

I'm not trying to shame anyone. I know there are reasons why some folks struggle to clean their sidewalks. I just think my city deserves better and can do better. I'm not ready to say exactly how that should be done, but I will be dreaming of the day when a sled is a fun toy to take down a hill and not also the most practical way of carting your children to their neighborhood elementary school across uncleared sidewalks.
Labels: #Snowbility #StillOneLessCar Equity Rev. Dr. Martin Luther King Jr. 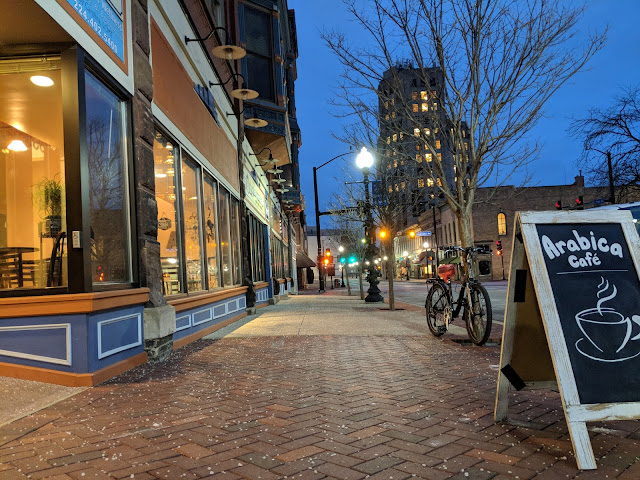