Is it safe? Part 4: The Power of Vulnerability

When I was a teenager my parents would send me out on my own into the world to ball practice, band camp, or an excursion with friends with the words "Be careful." For years, I was silently resentful. Did they think I was capable and responsible or not? As I grew older I came to see it as a prayer of sorts--a blessing on my way. I chose to imagine they were at least as much reminding me to be someone who takes care as they were warding off and wishing away any bad things that could happen--or at least assuaging their own guilt preemptively if something did.

That practice has helped this past year as I have grown into my own as a four season bike commuter who often finds herself disturbing the folks she meets or works with. "Be careful out there," is thrown at me with varying tones of voice. I often hear kindness and respect in that blessing. But I also often imagine it is followed by a silent "you crazy woman" or "you'd never catch me doing that" or other various judgments about my decision-making and risk evaluation skills. When I'm in a generous state of mind though, I choose to hear it as a blessing. I usually prefer to offer back a "Thanks. You too." to often bemused faces.

I recently told one colleague who has expressed a concern about my well-being (a colleague who has excellent taste in administrative assistants and coffee shops among her other abundant gifts) that I have a better chance of making it home on my bike than she does in her car. Honestly, I mostly said this because sometimes I grow weary of people's concern and well, I like her. And I tend to be sassier to people I like (word to the wise!). I'm not at all sure I can prove this. What I can say is that we tend to normalize the violence that happens in a car in ways I believe to be unhelpful, and when a collision does happen with a bicycle or a pedestrian we tend to put the onus of blame on biking or walking.

Since the advent of the car and the car's ensuing domination of the streets led by automakers and auto clubs, there has been a steady escalation in the size of cars and the violence caused by cars. As a nation, we have responded to this escalation by buying bigger and bigger cars, so that we are effectively stuck in an arms race, where the safest person on the street is the one who can afford to ride in the most up-armored vehicle.

According to the U.S. Department of Transportation’s National Highway Traffic Safety Administration, in 2016, nearly 40,000 lives were lost on U.S. roads, an increase of 5.6 percent of 2015. According to the National Center of Health Statistics, the leading cause of death for ages 5-24 is a motor vehicle. As Peter Walker writes in Cycling Can Save the World, driving a car is basically much more likely to kill you than terrorism. Yet, how many of us are more afraid of terrorist attacks than the car in our driveway?

I do not actually prefer to make anyone more afraid of terrorists or the cars in their driveways. Rather, I'd simply like to question the idea that I am safer in a car than on a bicycle. In a head-on collision my bike will be crushed by an SUV any day of the week. I think that's what makes us feel safer in cars. As I often tell Parker at an intersection when he takes his turn without checking to see if a car will actually stop, "The law may be on our side, but physics isn't." Yet, I think it's more helpful for all of our well-being (including mine on my vulnerable bike) to take a broader view of safety.

For example, what good is my immediate physical safety if it endangers others' safety? Beyond my belief that my well-being is tied up in your well-being, I have to ask, am I really safe if I hit and hurt someone with my car? I would imagine that comes with a lot of psychological and emotional pain if not physical pain. USDOT's NHTSA also wrote that 94% of crashes are linked to human error, which makes me think about how my grandfather would say, "It's not you I'm worried about. It's all the other drivers." Sometimes I also like to joke that the real reason I bike everywhere is that I'm a terrible driver. While that may have a kernel of truth to it, mostly it's that at this point I'm a very apprehensive driver who knows all too well the responsibility of driving a vehicle capable of such significant destruction.

Plus, in an arms race, everyone loses. It doesn't matter how big your car or your gun is, someone can always come up with a bigger and better one. In any system of supremacy, there is, to quote Ben Folds, "always someone cooler than you."
In the end, I think what makes me safer is to choose a mode of transportation that makes all of us safer. To me, the bicycle is the mode of transportation that results in the least violent crashes, produces the least greenhouse gas, and increases my health. Yes, I may have written on this blog about run-ins with school buses and the like, but I still believe that this form of transportation is safe enough for me and my family. It's a head trip even for me but I believe that ultimately the safest means of transportation for me is my vulnerable little bicycle moving through a sea of comparatively monstrous cars.

The only thing I believe stops an arms race in a lasting way is people who choose to opt out, who trust that real safety does not come from bigger armor but from an internal strength that weathers whatever worry and pain that may come, who choose the power of vulnerability for the good of everyone's health and safety.

Because what is safety? What is the goal of being safe? Is it protecting my life above all others? Does that really protect my life? What kind of life do I want to preserve? For me, safety ends up being about making the best choice on any given day that will improve or at least maintain my well-being and the well-being of others.

So, is it safe? Yes. As much as anything can be.

Can you still tell me to be careful? Only if you mean it as a blessing of protection.

Labels: #OneLessCar Is it safe? One Less Car vulnerability 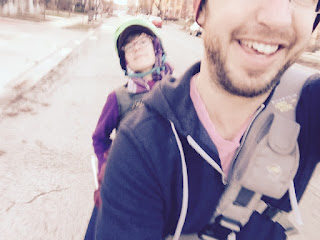